We have summed up the four most essential differences between the properties of adsorption and condensation dehumidifiers for a range of industries and commercial drying applications. This guide also details the functionality, benefits and downsides of our desiccant models, so you can more easily decide which dehumidifier best suits your production needs.

Whether one dehumidifying option is better suited for your production needs than another depends entirely on your air, humidity and facility properties and desired production climate. Cotes specialises in innovative, efficient adsorption technology which defines the functionality of our desiccant models. This guide compares Cotes dehumidifiers with condensation models, which use cooling coils.

1. FUNCTIONALITY: How Do The Dehumidifiers Work?

An adsorption dehumidifier uses a rotating wheel (rotor) with moisture adsorbing properties to remove water from the incoming humid air stream. The wheel, of which Cotes dehumidifiers have 1-3, is afterwards dried (regenerated) by a heated airflow. This means that the moisture previously contained by the air in your production environment is transferred from one airflow to another and then directed outside of your production area. Through this process, Cotes adsorption dehumidifiers can remove moisture from the process airflow without reducing its temperature.

Cotes adsorption dehumidifiers are moreover compact, easy to set up and very robust. They are made from DIN 1.4301 (AISI 304) so that they can easily withstand the humidity and surrounding cleaning processes of your production areas.

Condensation dehumidifiers contrast adsorption models in their approach. Instead of using adsorption to extract the water from the air, they use cooling and condensation to decrease humidity. The process air flow is herein cooled down to dew point temperature by an evaporator. The colder air is the less water it can contain, so the evaporator essentially forces the air to “let go” of the moisture (condensation) it was contained by cooling it past its saturation point. The condensed water is then collected and drained away. Since the process airflow is now very cold with highly saturated relative humidity, energy taken from the air by the evaporator, is once again given back to the air by the condenser to heat it. The final air stream is dry and warm.

2. OPERATION: Under What Conditions Do They Work Best? 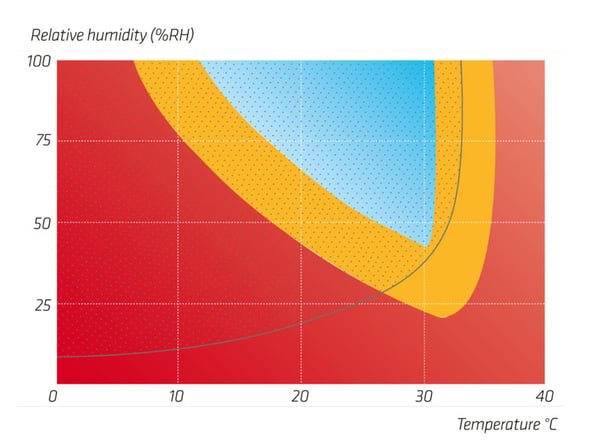 Adsorption dehumidifiers work best in the red and adequately in the yellow and blue areas.

Condensing dehumidifiers are superior in the blue and not effective in the red area. The yellow area is a transition section where they work adequately.

Adsorption dehumidifiers work best when the water has penetrated deep into a material such as walls and ceilings. You may see condensation or even mould formation in such places which indicates that an adsorption model may be better suited for your needs. They also work better (higher effectiveness at lower costs) in unheated environments, as will be most common in food and beverage production based on the safety requirements for your produce and product quality. The drier and cooler the air in your production areas, the better adsorption works.

Since adsorption dehumidifiers do not depend on initial cooling to remove moisture from an airflow they are not subjected to temperature limitations as the condensation dehumidifiers are. There is no theoretical limit to how dry the air can be made and it can reach dew point temperatures far below 0°C. If your production operates at temperatures around 15°C or you would like to achieve dew point levels of 5°C Cotes adsorption models provide a more controlled and reliable dry-air solution. The milk powder and spray drying production, for example, is ideal for adsorption technology.

At such temperatures, the cooling coils in the condensation models will suffer from ice formation which impacts the functionality of the dehumidifier. It is, therefore, not recommended to use these models below 5°C which naturally affects possible dew point temperatures. Contrary to adsorption models, condensation dehumidifiers increase in effectiveness and energy-saving abilities the warmer and more humid the air is. That is because the functionality of condensing water becomes less effective the colder the air is, meaning the less moisture it can contain and the more energy needs to be used to force the water out of it. They are most effective in higher temperatures around 15-30°C, which is why they are commonly used in living environments with less active airflow.

3. COST EFFICIENCY: How Do They Affect Your Energy Consumption?

To demonstrate the cost-effectiveness of both dehumidifiers the following example for a brewery production site will compare the moisture load and temperature influence both models would have at a given temperature. The example is illustrated in the following Mollier Chart – a diagram showing the relations between various air properties, such as the ones previously mentioned. 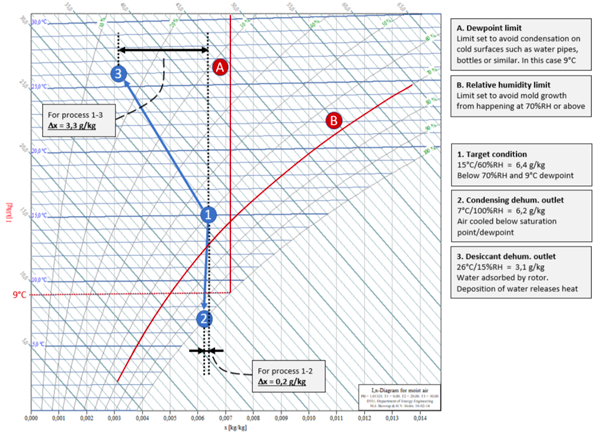 Given the same starting condition (1), the two dehumidifiers perform very differently. After the dehumidification process, the absolute water content has only been reduced by 0,2 g/kg when using the condensing method (2). When using the desiccant dehumidifier, the water content is reduced by 3,3 g/kg (3). The moisture removal is 16,5 times higher for the desiccant model which means that its dehumidification capacity will be equally superior for the same flow rate of air.

While there’s theoretically no limit to the dryness delivered from adsorption dryers, the minimal dewpoint of the air from a condensing dehumidifier is dictated by the temperature of the cooling surface. With a cooler at approximately 7°C and a target dewpoint in the brewery around 8°C, there’s only very little leeway to remove moisture at all by condensation (See process 1-2). However, with a desiccant dehumidifier in such an environment, the process is very different and allows much more moisture removal (See process 1-3).

While the moisture removal performance of the condensing dehumidifier will be dramatically reduced, the power consumption remains approximately the same. This results in a bad performance at a high cost, making the condensation model inefficient in such a climate. The only way to make a condensing dehumidifier work under these conditions would be to increase the flow rate of air to compensate for the small difference in moisture content before and after the cooler. However, increasing the airflow by such a margin (in this case more than 15 times) will result in a big and costly solution with much too high energy consumption.

4. ADAPTABILITY & DESIGN: How Can The Models Be Integrated Into Your Production? 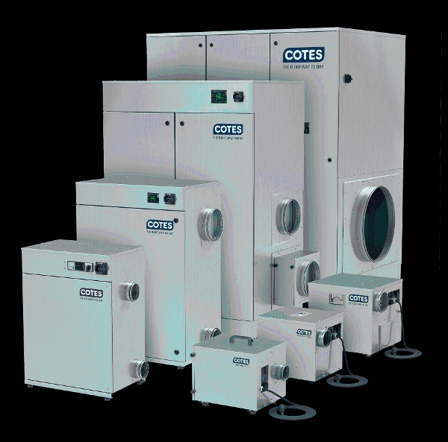 Since Cotes adsorption dehumidifiers can draw their energy from low-exergy sources, such as thermal inputs or waste heat from other areas of your production, they are not only easily and flexibly integrated into your production and energy systems but also very energy-efficient. Cotes specifically emphasizes customisability by offering configurations that can regulate energy savings, autonomously turn on and off depending on production demand, use heat recovery and desalt the air. Most commonly, food and beverage clients of Cotes opt for a model from the all-round/ C-line for their production needs. The different sizes and customisable details such as filter and additional modules make it easy to compromise neither on your humidity nor energy-saving wishes. You can request a product recommendation or look through our free downloadable brochures for more information.

Condensation dehumidifiers are a little less flexible when it comes to the energy source. The cooling circuit which is run by a compressor requires a high-exergy source, such as electricity which limits the installation site but does not usually pose an issue for the environments condensation dehumidifiers are suited for. Our LK model adapts some characteristics of the cooling dehumidifiers and as a hybrid model, it can drain the extracted water away instead of directing a humid air stream out of your production area.

If you'd like to determine whether you have a need for adsorption or condensing dry-air solution in your production and would like to receive a product recommendation please feel to reach out to our trusted partners near you. 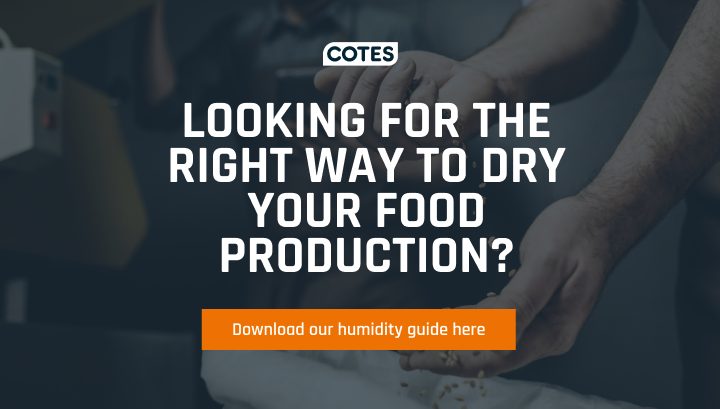