Inside chemistry - Absorption vs Adsorption

In this blog, we explain the chemical process at the centre of our dehumidification method as well as the differences between the two sorption forms: absorption and adsorption.

For sure you have heard about absorption, but what about adsorption? The lesser-known process of adsorption is the method that is central to Cotes' dehumidifiers for dealing with humidity. But let us take it from the beginning.

Both absorption and adsorption are sorption processes. Sorption is a physical and chemical process through which one substance attaches to another. The main difference is that while absorption involves the mass transfer of particles into another material (one substance absorbing another), adsorption takes place with the adhesion of particles onto the surface of a susbtance. 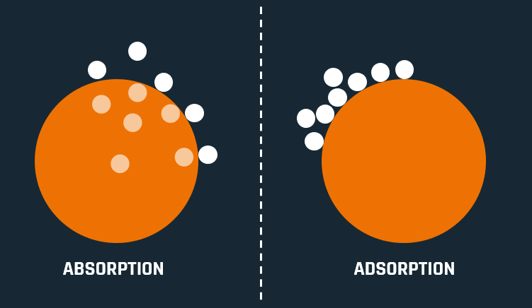 Absorption occurs when molecules pass into a bulky material. The particles diffuse or dissolve into another substance (which absorbs them), forming a solution. Once dissolved, the molecules cannot be easily separated from the absorbent.

An everyday example of this is a paper towel absorbing water - imagine water evenly permeating a paper towel as it soaks it up. The ratio of absorption depends on factors like concentration levels of the substance being absorbed, exposed surface area, and pressure.

Adsorption is a process in which atoms, ions, or molecules from a substance adhere to a surface (of the adsorbent). This is classified as an exothermic process because energy is released when the adsorbed substance sticks to the surface of the adsorbent substance. The rate of the process depends mainly on the surface area and temperature: lower temperatures promote adsorption.