A recent independent study by Fraunhofer confirms what Cotes' engineers have known for a long time, that there is a direct correlation between humidity and the technical faults that occur in wind turbines.

For a long time, the underlying causes of the frequent and costly failures in wind turbine power-converters were largely unknown. Fraunhofer’s study, which looks at the WTG (wind turbine generator) failures, brought together a large consortium of research institutes and companies and was commissioned to identify the root causes and drivers in power-converter failures.

The results of the Fraunhofer paper titled “Humidity in Power Converters of Wind Turbines — Field Conditions and Their Relation with Failures” (Fischer et al. (2021)), challenges the widespread assumptions that thermal cycling induced fatigue and turbine age are significant contributors to power-converter failures. Instead, the results point to humidity and condensation as important factors in power converter failures.

To give a bit of perspective, the question about what causes wind turbine failures has for a long time been associated with the fatigue effects in the power electronics caused by the power and temperature cycles. This is proven to not be the case and the field data analyses of an international fleet of wind turbines at Fraunhofer IWES have clearly shown that such damage mechanisms as seen in other applications do not play a relevant role in wind turbines (Bartschat et al. (2017), Fischer et al. (2018)).

Instead, the prominent seasonal failure patterns observed indicate that climatic environmental influences to be a critical stress factor (Fischer et al. (2019)), humidity in particular. Yet the question remained, what levels of humidity and temperature are the converters in the turbines actually exposed to? 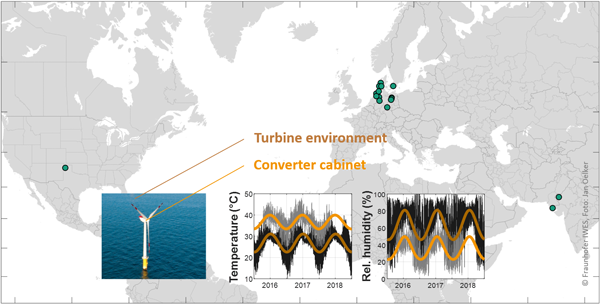 Figure 1: Sites in North America, Europe, and Asia where the field measurements were carried out; sample time series for seasonal variation of temperature and humidity in the converter cabinet and the environment around a turbine in India.

This question is answered in the recently released paper titled “Humidity in Power Converters of Wind Turbines — Field Conditions and Their Relation with Failures” (Fischer et al. (2021)) which examines humidity and temperature in detail.

It summarizes the results from field measurement campaigns on 31 wind turbines from seven different manufacturers spread across three continents. The measured turbines are extremely diverse and included both onshore, nearshore and offshore turbines, with converters in the nacelle or tower base as well as turbines with air- and water-cooled converters.

In short, the climatic stress depends on:

Seasonal variations of phase-module failure rates in turbine fleets in India and Scandinavia were observed – specifically, that the months with high failure rates coincide with the rainy seasons or the months with the highest absolute humidity. This led the researchers to note the indication that humidity and/or condensation are significant risk factors for the emergence of phase-module failures.

Humidity conditions inside the converter cabinets were also investigated in relation to the ambient humidity of the turbines, finding that because the temperature level of the converter components is mainly determined by the operating point and the settings of the cooling system, the risk of condensation in the power converter increases directly with the dew-point temperature.

In light of these findings, it is recommended to pay attention to the environmental conditions that turbines are exposed to – especially the absolute humidity and to implement strategies to manage humidity inside the nacelle and converter cabinet to minimise condensation. What is your dry-air strategy?

In the video below you will see a recent conversation with Peder Nickelsen. Peder is a leading industry expert and COO for Stiesdal and shared his experience and knowledge on the types of humidity issues he has observed inside wind turbines, onshore and offshore, during his 25 years in the wind industry.

Cotes’ technical director, Rasmus Toftegaard, comments on the important link between humidity and power-converter failures confirmed by the Fraunhofer study and observed by Cotes’ engineers for almost 20 years now, yet has somehow been overlooked by the industry to a certain extent.

About the publisher:  Fraunhofer IWES (Fraunhofer Institute for Wind Energy Systems) has led all the above-mentioned studies. Special thanks to Dr.-Ing. Katharina Fischer, Senior Scientist at the Department of Validation and Reliability for further contextualization and input.