The value of a dry-air strategy for wind turbines

A conversation with Stiesdal COO, Peder Nickelsen, on the issues facing the wind industry today and the benefits of a sustainable dry-air strategy for operating and maintaining wind turbines - onshore, nearshore, and offshore.

As the COO for Stiesdal, Peder Nickelsen is a trusted advisor to Cotes and many others in the wind energy industry. We asked Peder why he thinks it is important to have a good dry-air strategy inside a wind turbine and throughout the whole turbine lifecycle.

Peder Nickelsen has decades of experience in the wind industry and is seen as one of the pioneers and founding fathers of the modern wind industry. For more than 25 years Peder worked closely with Henrik Stiesdal, the "grand old man" in the wind industry, during his time at Siemens Wind Power. Nickelsen is now COO of Stiesdal Offshore Technologies, where they develop new foundation designs, storage, and PtX solutions. Investors include Shell and Innogy.

Peter Nickelsen explains why he believes it is important to have a good dry-air strategy for wind turbines, onshore and offshore.

Peder reflects on his years in the industry with pride, “I’ve actually been in the wind industry for more than 26 years and have been very much involved in the offshore wind industry. I’ve had the design responsibility for quite a few wind turbines early on and in that regard, it has been a very good feeling to see that this industry has grown a lot since I did my very first turbine back in 1998. I’m quite proud to see all those turbines still operating outside of Copenhagen today.”

Yet keeping wind turbines in optimal operational condition and performance for over 23 years is no easy feat when considering the numerous issues and dangers wind farms are constantly exposed to – the biggest and most persistent threats being humidity-related.

“I think there are potential humidity issues or challenges in both offshore and onshore turbines, partly because onshore turbines are also exposed to humidity levels like we for instance see here in Denmark.”

The Issue of humidity [and salt] in wind turbines 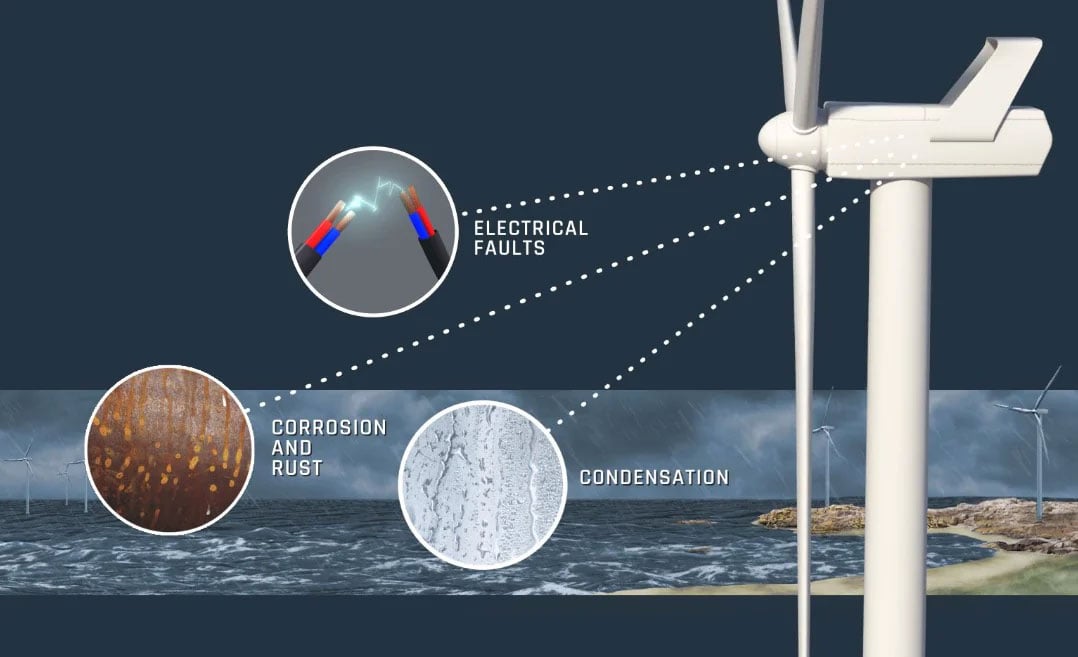 Wind turbines are exposed to the elements from the moment they leave the production floor. Whether your wind turbine is onshore, nearshore or offshore, you need a dry-air strategy to avoid mould, corrosion and electrical faults in your turbines.

Humidity prevention is also referred to as asset protection. It is never too late to control the humidity in your wind turbine. If you factor in the right dry-air strategy and solution from the very conception of a new wind turbine, you have the compounded benefit of reducing design, maintenance, and service cost. BUT, if retrofitting a dehumidifier is your only option then you can still remove the threats posed by humidity to extend the lifespan of a wind turbine and reduce unplanned downtime.

Humidity is not just an offshore issue, it is also an onshore wind turbine issue, at least, we see a lot of issues in turbines located in nearshore conditions (under 10 km from the coastline) exposed to high levels of humidity and salinity. Peder explains, “I think that overall controlling the humidity is a very important thing in relation to the turbine design. It’s actually not only an offshore thing, but it’s also relevant for onshore turbines which are located in relatively humid conditions.”

Finding the right dry-air strategy for your wind turbine

With over 20 years of experience as a lead engineer at Siemens alone, Peder offers his preferred remedy to the humidity issues, “For the offshore application you would normally have a dehumidifier which basically secures that there is only a certain humidity level in the air and that is a huge benefit for the corrosion robustness of the turbine. Not only in relation to steel components but also in relation to the electrical components, where corrosion, for instance, can even lead to main component failures, like a generator or a transformer”.

Peder goes on to highlight the importance of a dry-air strategy and the consequences of not having a strategy, “It’s important to have a dry-air strategy if your design is working with low corrosion inside the turbine. That is mainly in order to avoid too high OPEX costs over time and also to avoid sort of unforeseen issues or breakdowns. Those of course can be rather costly because it is normally quite expensive to repair the numerous issues related to corrosion.  If you don’t have a dry-air strategy you need to plan for quite severe conditions, which could even be for what is called a C5M marine environment and that would inevitably lead to a significantly higher cost of the components. There would also be a significant risk that even a small scratch in the surface protection of the component could lead to corrosion issues.”

The right way to dry your wind turbine

Above: Two technicians installing a Cotes adsorption dehumidifier in a retrofit solution.

After years of experience in this field, Peder seems to have found a solution that he can confidently recommend from a wide selection of possibilities.

“There are obviously alternatives to a dry-air strategy for securing the corrosion protection of a turbine. However, over the years we have been testing a number of alternatives and my personal belief is that the dry-air strategy has come to stay and would be the chosen solution going forward. At least when you have a relatively enclosed environment, because it has proven to be both a robust and also a relatively cheap way of securing the environment”, he says, even referring to Cotes dry-air solutions, adsorption dehumidifiers, as “low-cost enablers”.

Peder's current work includes heading various environmentally conscious projects and activities for Stiesdal, which allows him to optimistically anticipate the future of wind energy as one of sustainable growth.

“I think the overall benefit of a dry-air strategy would be that the power from the windturbines is becoming more reliable but a secondary effect is also that the bankability of the wind turbine is becoming higher and, thereby, there is less concern for investment bankers and sellers to actually invest in the offshore wind turbines."

When considering the right dry-air strategy for your wind turbine you need to consider if the corrosion class of your turbine is suited for the corrosion index [Cotes Corrosion Index] of the surrounding climate of the wind farm location. So, when turbines are being installed in hot and humid locations – APAC region as an example – we see an increasing demand for a stable dry-air solution. This is all a roundabout way of saying, “High humidity bad, dry air good”.

But don’t take our word for it!

Fraunhofer released a report In light of the frequent and costly failures of power converters in wind turbines. A large consortium of research institutes and companies joined forces to investigate the underlying causes and key driving factors of the failures. [Spoiler alert! Humidity issues are key driving factors]